Dublin is full of history! There have been many moments over the years that Dubliners will always remember, whether they experienced those moments for themselves or whether the stories and tales have been passed down from generation to generation.

Here we take a look at some of the most famous moments in the history of the great City of Dublin!

Sheedy puts the ball in the English net, Eamon Dunphy flings a pen across a studio and most importantly “The nation holds its breath…” The nation then comes to a standstill. After Timofte’s miss, David O’Leary became Ireland’s hero when he scored past Romania’s goalkeeper, a penalty that sparked wild celebrations up and down the country, none more so than in Dublin where the City came to a halt to welcome home its returning heroes... Let's not talk about Schillachi! Now to put 'em under pressure and go out and win the whole lot, maybe in 2022 or 2026!

Read about more of the Irish Team's exploits at the FIFA World Cup!

When John F. Kennedy visited Ireland in June 1963, he became the first sitting U.S president to visit the Emerald Isle. During his visit to Dublin, the president was greeted by huge crowds along every step of the way. JFK was the first foreign leader to address the Houses of the Oireachtas (Irish Parliament) and during his stay he placed wreaths on the graves of the leaders of the Irish Rising of 1916.

The visit was particularly appropriate as Kennedy, a frequent visitor to Ireland in his youth, was of Irish descent. The Kennedy ancestral farm and home was located in Co. Wexford. Fellow US president Barack Obama also made a visit to Dublin, some 48 years after President Kennedy.

Padraig Pearse reads the Proclamation outside the GPO.

The birth of a nation! The day was Easter Monday April 24th 1916 and the location was outside the now iconic General Post Office on O’Connell Street when rebel leader Padraig Pearse read the Proclamation to declare the “right of the people of Ireland to the ownership of Ireland and to the unfettered control of Irish destinies, to be sovereign and indefeasible”.

The fighting and sacrifices that would ensue over the next 6 days would go down in history as the beginning of the road to Irish Independence. Irish Independence would officially arrive less than 6 years later in January 1922.

Dedicated to British Navy Admiral Lord Nelson, the almost 37 metres high pillar commemorated Nelson’s victories at sea. A 13 foot high statute of Nelson himself stood on top of the column. In 1966, members of the Irish Republican Army decided to blow up the monument as they viewed it a lingering symbol of the former British rule in Ireland.

Miraculously, no one was injured in the explosion despite many people being in the area at the time. Dubliners of a certain vintage recall the day itself and love sharing stories about the unplanned removal of the Pillar.

The Adelphi Cinema in Middle Abbey Street was the venue and November 7th 1963 was the day when The Beatles came and thrilled Dublin. The fab four played two gigs that day and certainly left a lasting impression on Dubliners who were in attendance for the live shows. The Gardaí were caught by surprise by the sheer volume of Beatles fans who turned up ticketless just hoping to catch a glimpse of their heroes.

By the time the second concert of the day was finishing, a small riot had broken out on Abbey Street causing The Beatles to have to make a quick exit out the backdoor of the cinema before hastily jumping into a local Dublin newspaper delivery van.

Dublin was abuzz in 1979 when Pope John Paul II visited the country, it was the first time a pope had ever made the visit to Ireland. Upon landing in Dublin, the pope kissed the ground as he disembarked from his Boeing 747 which was appropriately named St. Patrick. A mass was held in the Phoenix Park with some 1.25 million people attending, this was approximately 1/3 of the Irish population at that time.

A Papal Cross was erected for the event in the Phoenix Park - the cross can still be visited today, just hop off at the Phoenix Park stop on the DoDublin City Tour. The Pope’s visit is something that still gets talked about in Irish households to this day and the country experienced a second papal visit in August 2018, this time from Pope Francis, although we’re not sure if the number of attendees quite reached the levels it did in ’79.

Although the city is known to be a little bit older, Dublin celebrated its millennium in 1988 when the Irish Tourist Board at the time decided that Ireland’s Cities should celebrate significant events and milestones. The year proved to be a huge success as Dublin celebrated its big birthday in style with special events including sport, literary and musical occasions being organised. A unique 50 pence coin was minted and they’re still a collector’s item to this day.

As part of the year of celebrations a huge street carnival was organised and the now iconic statue of Molly Malone was unveiled for the first time. The year was very important as it fostered a sense of civic pride among Dublin communities as the decade was set amidst the backdrop of a horrendous economic downturn. DoDublin Tours celebrated the year by wrapping a tour bus in special livery to remember Dublin in the Rare Auld Times. 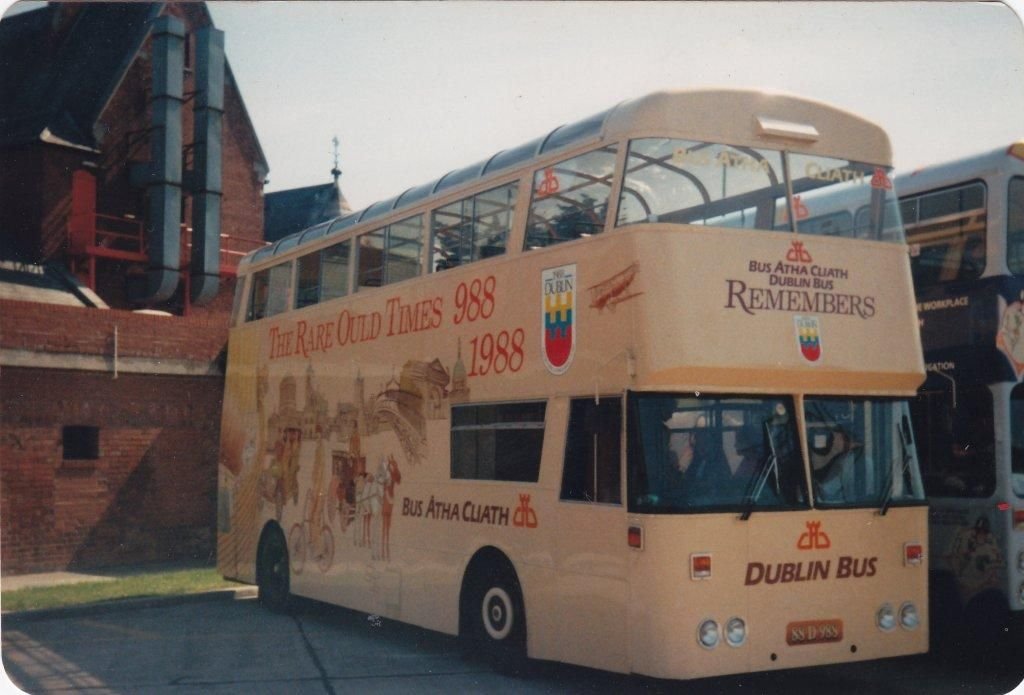 Speaking of ’88, DoDublin Tours celebrated its 30th birthday in 2018. Discover the Number 1 Dublin City Tour this year and enjoy live commentary from the best local guides!

Or, delve into the vaults of Dublin Castle and discover the remains of some of Viking Dublin’s original defences and structures on Dublin's Original Ghostbus Tour!