The Hugh Lane is located on Parnell Square North which is only 10 minute walk from the Spire.

The museum itself is located in Charlemont House which is a mansion that was built in 1763 and was designed by a man called William Chambers. It features a vast collection of artwork and they range from modern and comtemporary from both Irish and international artists.

There is a permanent collection of artwork in Hugh Lane Gallery and it does include exhibtions too. Born in Dublin, Sean Scully is best known for his paintings that can be recognized internationally as he is a world-renowned abstract paintings. There is a whole room that is dedicated to him and the artwork that he has created. In 2001, the studio of Irish-born British painter who focused on imagery that both raw and unsettling, had his studio reconstructed  after it was dismantled in 1998 and was moved to the gallery. 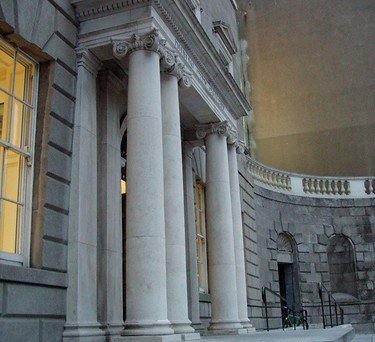 There is an array of French collections, including The Umbrellas, Portriat of Eva Gonzalés, View of Louveciennes and many more. There was a painting called In The Omnibus by French artist Honore Daumier and it was stolen from the musuem in 1992.

Other free attractions and their locations

On Nassau Street is the National Library and Trinity College where the Book of Kells is located.

St. Stephen's Green and across the road is the Little Museum (free with a Hop-on Hop-off Ticket)

On Sarsfield Quay is the Decorative Arts and Hisotry Museum at Collins Barracks.

This art gallery is a "must see" when visiting Dublin. Very close to the Jury's Hotel and Sein Fein headquarters.

The admission is free and worth staying at least 1 to 2 hours. Nice gift shop.